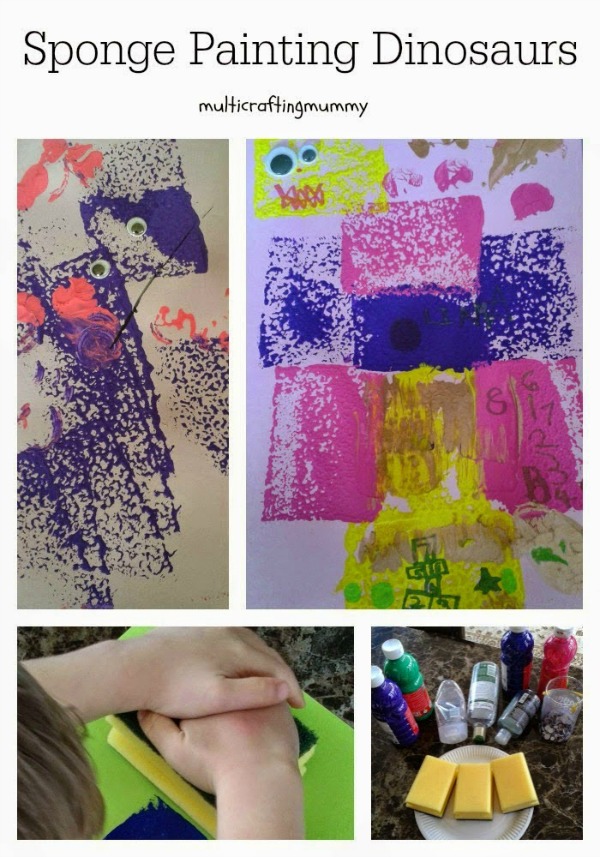 Arts and crafts don’t always have to involve specialist materials. Sometimes all you need to do is look around and see what you already have at home.  It’s definitely worth getting into the habit of saving some of your empty cereal boxes, toilet roll tubes, plastic bottles and bottle tops for arts and crafts projects.Ordinary household item such as washing up sponges  are really handy to have in stock as well. Sponge Painting is a classic children’s painting activity, which I remember fondly from my own childhood.  It’s a really quick and simple activity to set up as well, making it great to bring out on a rainy day. Dinosaurs are the theme this sponge painting activity.

How to sponge paint Dinosaurs 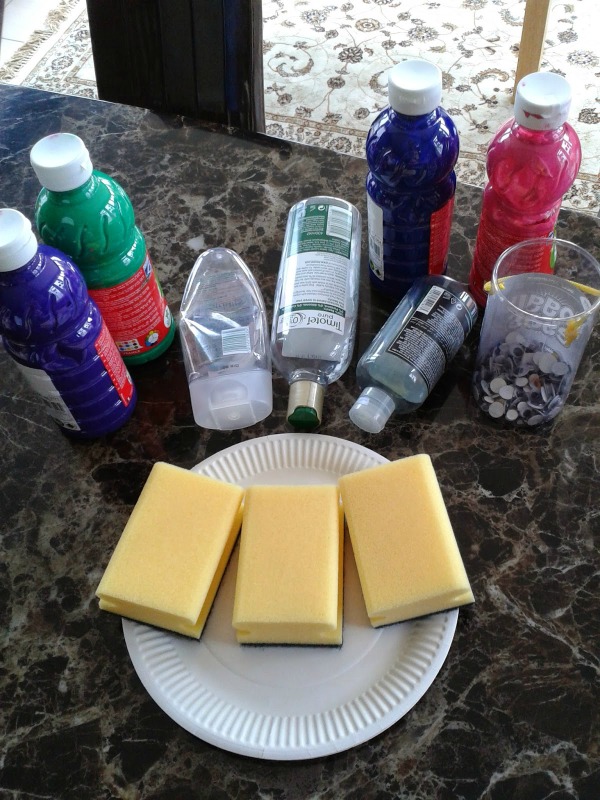 We used:
Washing up sponges UK Link/ US link
Empty shower gels bottles
Paint UK link/US link
Goggly eyes UK link/US link
Scissors (unplanned!)
This post contains affiliate links for your convenience and at no extra cost to yourself.The sponges were used to create the head and body of the dinosaurs and then we used the shower gel bottles to add on spots and spikes. My pre-schooler discovered that using the sides of
them was also a great way to add on some legs. 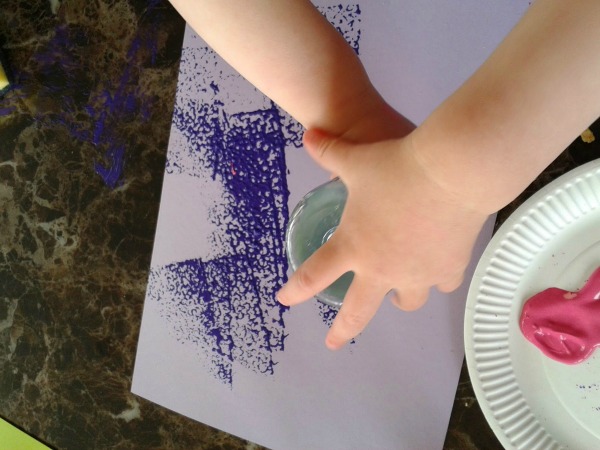 I set up the activity ahead of time so that I could then sit down and oversee the activity alongside them. They all had the same materials to choose from and each of them chose their own paint colours.  They
then had free reign to create their own dinosaurs.  My toddler daughter really enjoyed this activity.  Her picture doesn’t really look too dinosaur
like, but that’s not really the point as she has only just turned 2.  It was great to see her exploring new
textures and seeing what she could do with them.  Using different materials is a great way to
help engage young toddlers with arts and crafts activities. She did get a good bit over her hands and arms as well, so it was a good job we had a bowl of warm soapy water and a towel on standby! 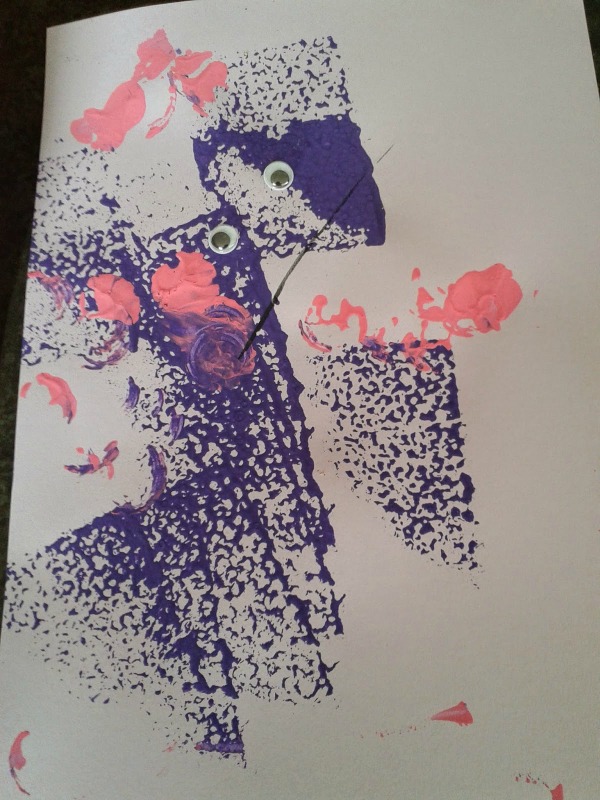 My Pre-schooler was very definite on the colours he wanted
to use, green and blue, his current favourite colours.  I like to give the kids as much freedom as possible in our activities.  It’s useful to give them a little structure
and guidance when they need it, but ultimately it’s their own imaginations
which make their pictures come to life.  He decided his dinosaur would only have three
legs and no arms.  He created the the legs using the side of
a shampoo bottle. 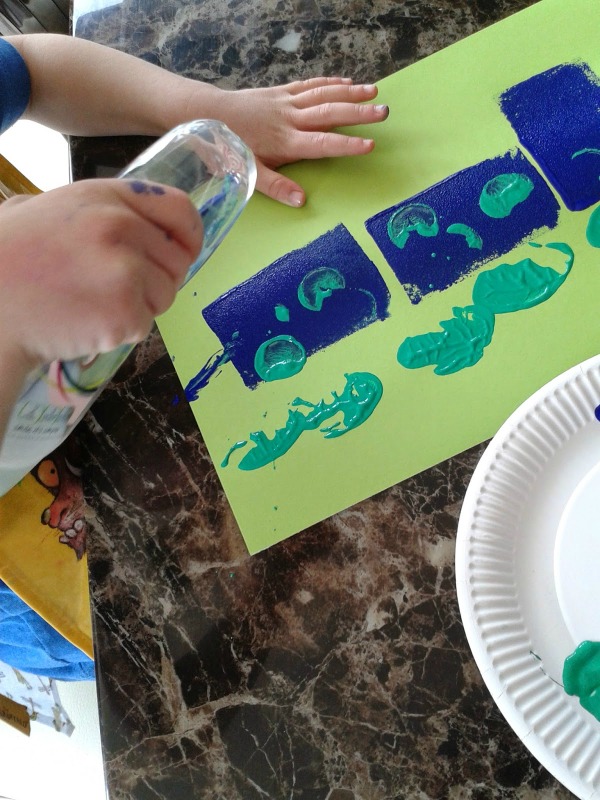 We did have a spot of bother though when it came to adding on the facial
features with felt pens and googly eyes, once the paint had dried.  My pre-schooler was very unhappy, as the pens he choose
just weren’t bright enough to show up, so he had a big strop and ended up
taking a pair of scissors to his work! 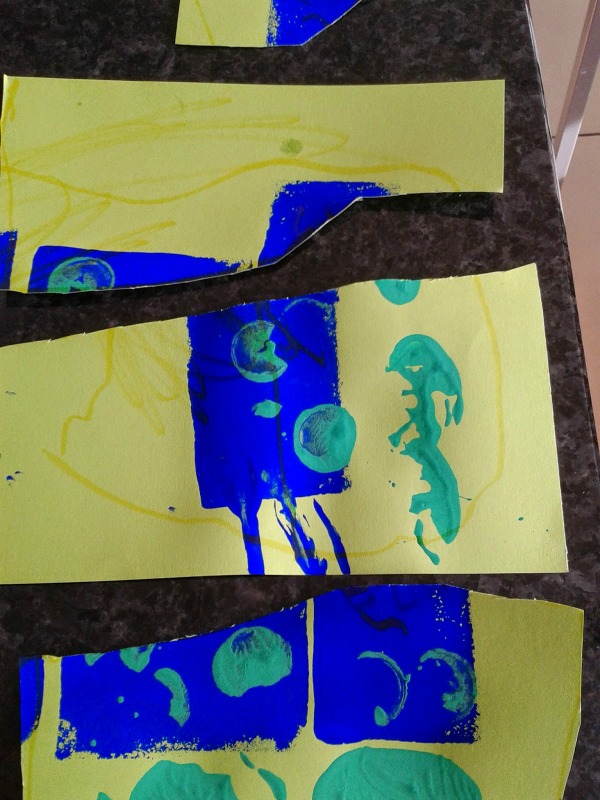 My big school infant was the most creative of the three.  He wanted to use more colours and he created
the biggest dinosaur.  He also added a
tail to his creation. It’s magical to see how each of my children develop as
they get older.  My eldest child loves to
put his own stamp onto projects now, which is great to see.  He will also just set himself off drawing and
making things now which is brilliant and something that I hope he will continue
to enjoy as he grows up. 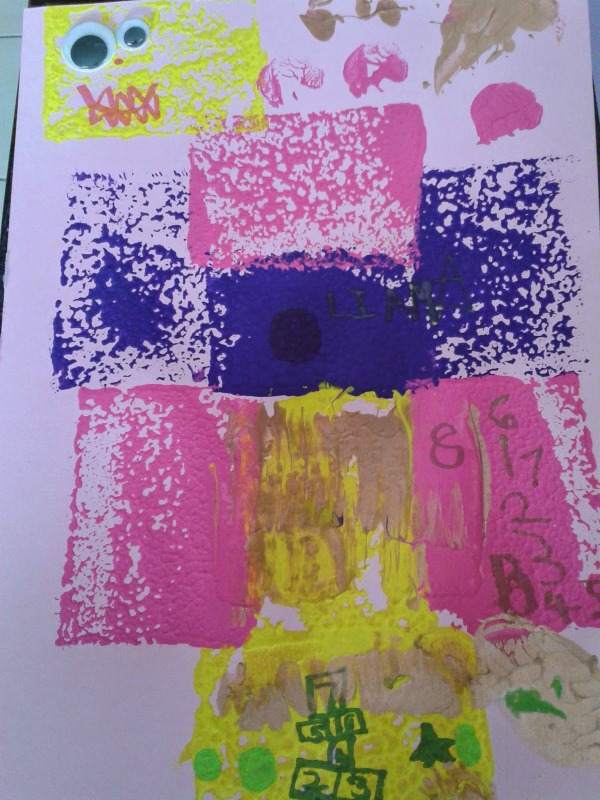 Tell me about your sponge painting adventures…
And what other household items do you use for painting with?

8 thoughts on “An old classic…Sponge Painting!”