Skip to content
Pin154
Share3
157 Shares
Cool down in the garden with this giant dinosaur ice cube rescue activity. 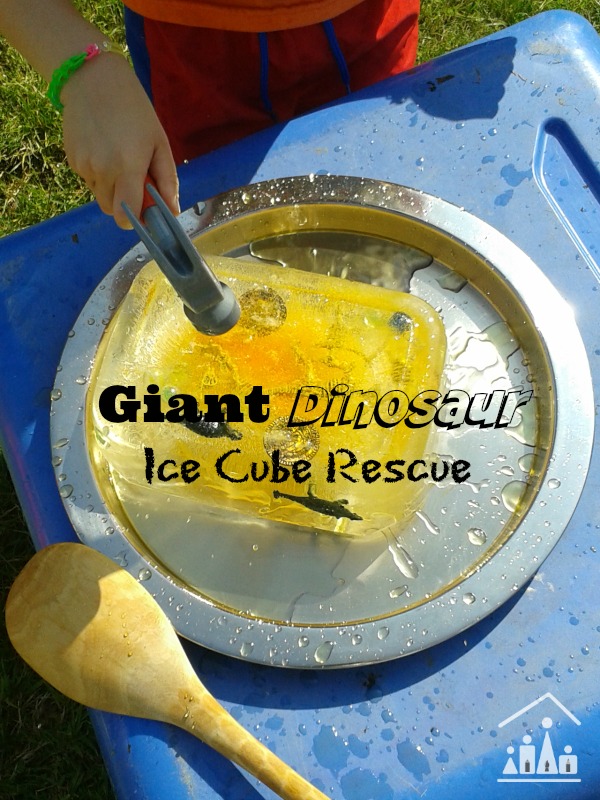 We have been so lucky with the weather over the school holidays and have enjoyed lots of long hot sunny days. To help keep us cool, we have been having fun playing with ice. And our favourite icy activity this week, has been our take on a “Giant Dinosaur Ice-Cube Rescue” inspired by this great idea from Our little house in the country. This is the perfect activity to have ready in the freezer, so you can pull it out when the kids are hot bothered and need to cool down outside.

How to make a Giant Dinosaur Ice Cube

I filled a large Tupperware with about 2 cm of water and placed this into the freezer for a couple of hours.
Once this had frozen, I took it out of the freezer and added in around half of the “treasure” and filled it up around half way with water and added a few drops of food colouring.
Then I popped it back into the freezer for another few hours.
I decided to give this particular ice-cube a “Dinosaur Theme,” so I added in some small dinosaurs and also some marbles for “rocks” and a few “coins” for “real treasure”. It’s a good idea to add items of different sizes and textures. 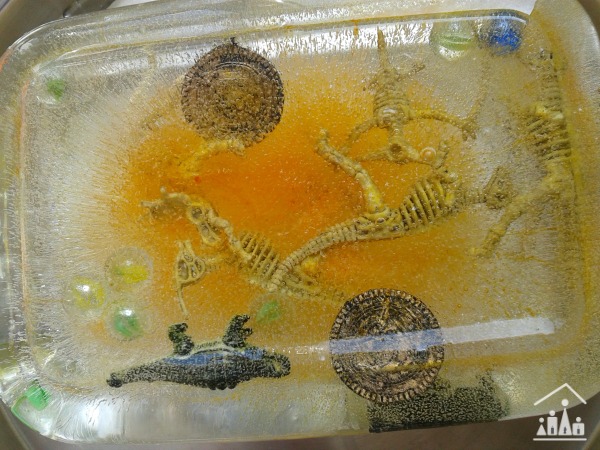 The next day, I took out the container and loosened the cube by running a little warm water over it. I then turned it out onto a deep tray and showed the kids. The boys were very excited when I told them that they had to find the “hidden treasure” inside the ice. They had a good peer and poke at the ice-cube and chatted about what they thought they could see inside it. My 2 year old didn’t seem too impressed with it, so I was a little worried about including her in this activity. 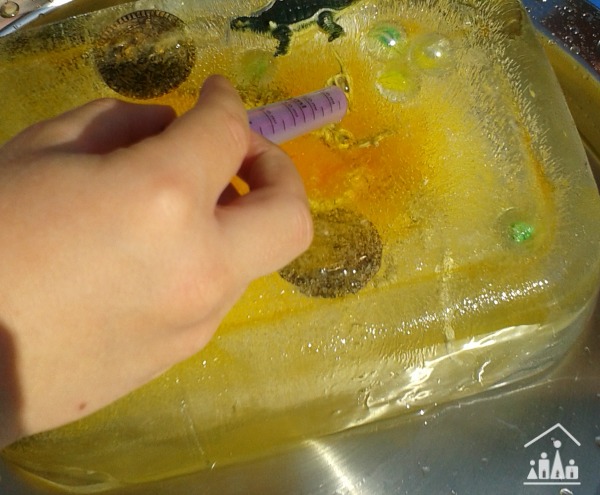 All three kids set off giving the ice-cube a good bash with their toy hammers and wooden spoons to see if they could chip into the “treasure” that way. They weren’t making much progress, so I quickly introduced the warm water and showed them how to syringe it up and squirt it over the ice to help start to melt it. My 6 year old really got into this and he used his syringe to target a particular piece of “treasure” that he had his eye on, one of the larger dinosaurs that I had placed inside the ice-cube. He worked away at it and was eventually rewarded, when he was able to dig the rest of it out with a spoon. 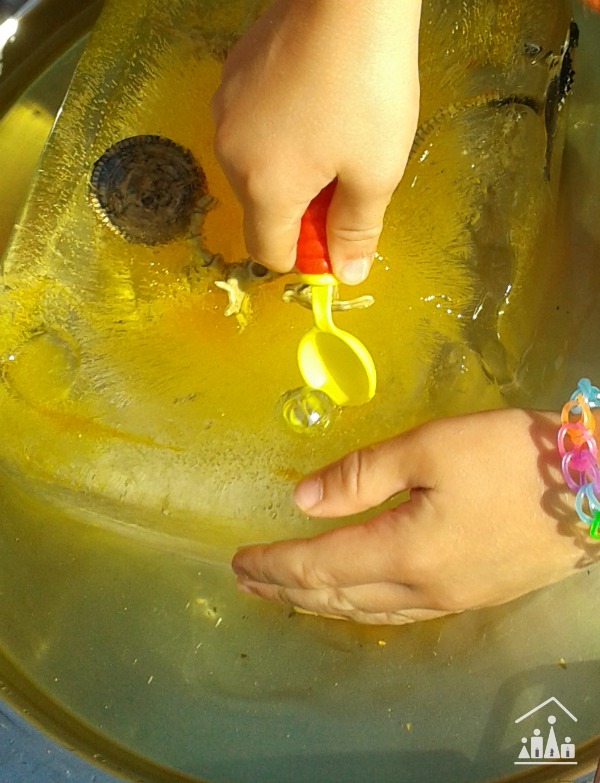 My 2 year old couldn’t handle the syringes, but this didn’t hold her back from giving the ice-cube a good old bash! She wasn’t particularly interested in finding the hidden “treasure, she just kept laughing as she picked up different things to try and smash it. Doing the activity outside was a good idea, as it meant that she could hack away for a few minutes and then take herself off to potter around the garden with her ball or to jump on her scooter for a quick ride, whilst the boys carried on with their excavations.

My 4 year old did get a little frustrated at times as he wasn’t quite as good as digging out the “treasure” as his bigger brother. But I think a lot of that was due to this being our first full day back after a week away and he had a lot of sleep to catch up on! But again being outside in the fresh air, meant that he could have a good run around the garden to release some of his frustrations for a few minutes, before settling back down into the activity. 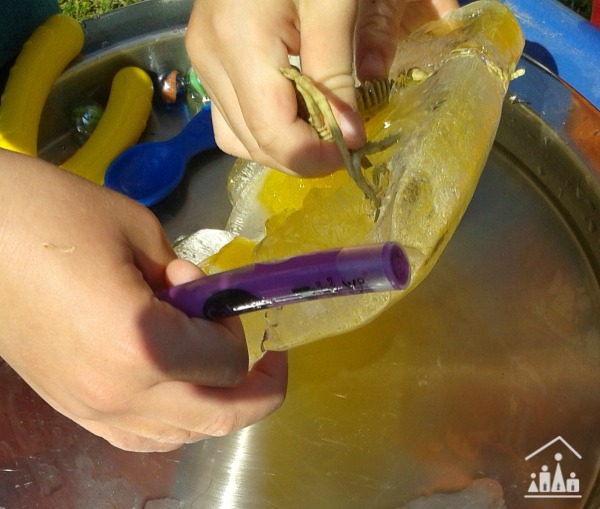 The boys spent a good hour working away at the ice-cube, not satisfied until they had got every piece of “treasure” out and smashed up every piece of ice. I even managed to get a bit of weeding down in the garden in-between trips to fetch more warm water for them. 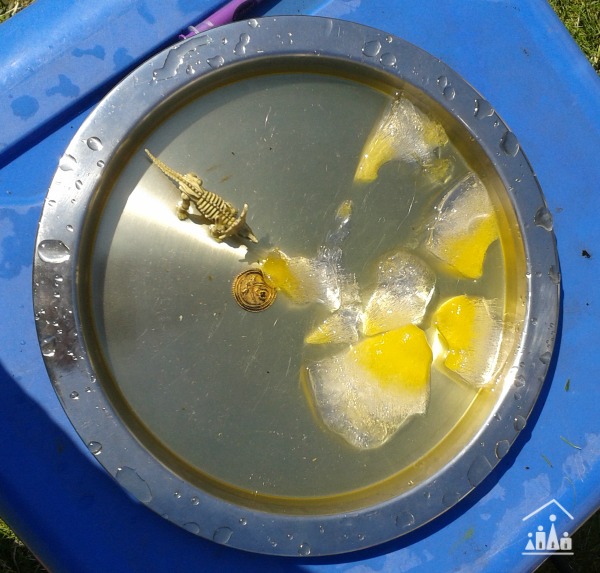 If your kids are more into Lego than dinosaurs, then you could try our Summer Lego Ice Rescue instead.