When I m planning an arts and crafts activity I try as much as possible to get my own children to help me come up with ideas on things that they would like to do. When we were making a list of things we would like to make about “Spring” my eldest son said that he really wanted to make a rainbow picture to go over his bed. Now we could just have got the paints and crayons out and made a lovely rainbow picture using them, but we decided we wanted to do something a little bit different.

During the week that we had been making our “Spring Ideas” list my eldest two had been really enjoying doing a mosaic sticker book that I had bought them, which got me thinking about how we could make our rainbow pictures.  I had a good few sheets of different coloured sugar paper lurking at the back of our craft supplies cave so I decided to cut these up into small “mosaic tile” squares and we used these to create our rainbow pictures.

We all sat down together for this activity.  I gave my 6 year old a glue stick, a large sheet of white paper and a pencil to draw out the outline of the rainbow and in the middle of the table I had all of the different coloured tiles of paper for him to choose from.  For my 4 year old I drew out the outline of the rainbow and gave him a glue stick and again let him choose his own paper tiles to add to his own rainbow picture. For my 2 year old I again drew out the outline of a rainbow onto a large sheet of white paper and under my supervision I helped her to pick out and stick on her own tiles of paper. To make this a bit more interesting for her as well I was asking the boys to tell her what colour each of the tiles was as she was sticking them onto her paper and they were telling her about the colours that they were using.

This is my 6 year old sons finished picture! 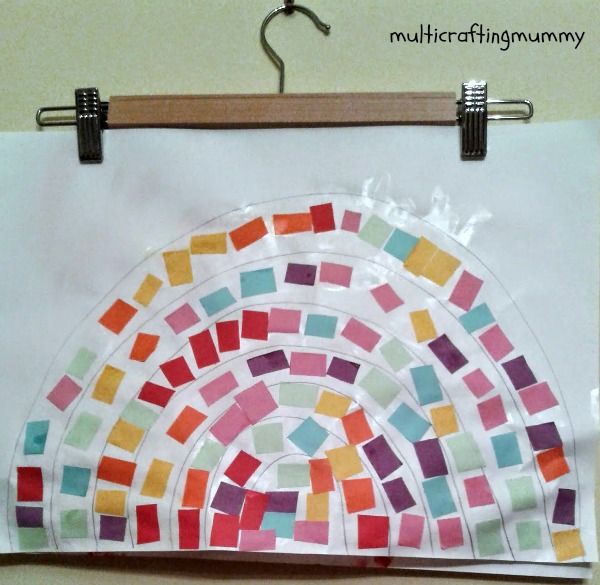 This idea could be re-used to make many different pictures which we have indeed done as I had cut out far too many pieces of paper for this one excercise. We had great fun using some of them up on decorating some egg pictures during the school Easter holidays.

What kind of pictures would you like to create?